You see that doll up on stage? That’s Goldie. She use to be a big-time star. Real big. Shoulda seen her a few years back. She’s had a rough go of it lately. Fallen on hard times.  Happens to the best of us. But look at those gams – she’s still got it goin’ on! And a voice like velvet sunshine on a cold, rainy night.

Mikey, Nancy, Sammy-B, Franko, Delia – they all use to hang-out here…

Listen to me goin’ on… an’ you standin’ there still, the damp o’ the night all over ya. Come on, grab a seat. Take a load off.

Bartender!   A drink for my friend here will ya – in a clean glass!

What were we talkin’ about last time anyway?  Oh yeah, night photography.  I was goin’ on about the ‘good ol’ days’… or ‘nights’ as it were.  We never really talked any photo stuff. Yeah, sorry ’bout that. I get kinda caught up some times. Well I ain’t no Gyula Halasz (that’s Brassai’s real name ya know), that’s for damn sure.  But I’ve spent a night or two poundin’ the pavement. Seen a few things. Sure, I’d be happy to tell ya what I know, even though it ain’t much.

You’re not the talkative type, are you?  That’s OK. But if ya get tired of my jawin’ and want to share some stories of your own speak right up.  I got no place to be. Not ’til 3am anyways, that’s when Destiny gets off work.

So… ‘night photography’. I like to keep things simple and so I tend to think of it in one of two ways: either you’re shootin’ handheld, or you’re shootin’ on a tripod. A tripod or whatever. What the fancy photogs call ‘long exposures’.

Shooting handheld has… such a feelin’ of… freedom. Man, the feelin’ you get movin’ silently through the night, stealing fleeting moments of time… like a cat burglar in a living, breathing… the French museum… what’s it called?? – yeah, ‘The Louvre’.

There ain’t no other feelin’ like it. Some shots ya can only get that way. You know those moments – blink and they’re gone. Sometimes we only get one shot in life. That’s the way it goes. But it’s the feelin’ really. The ‘rush’. I know this is gonna sound corny, but it’s true – ya become ‘one with the night’. Don’t laugh.

Now, long exposure on the other hand… that’a a whole other ball o’ wax.  That requires patience. Sometimes plannin’. Waitin’.

But those sweet, sweet images! Like somthin’ right out of Tinseltown! So alive! So addictive they should read ya a warnin’ before you lock your peepers on them!

Which do I love more?   I don’t know. Don’t ask me to choose, I couldn’t if I wanted to. I don’t have the heart. Yeah, I’m a two-timing sucker for trouble.

Whether I’m shooting hand-held or long exposure I’m like a moth, attracted to the light.  I usually shoot in manual… sometimes Av.  Mostly manual focus too.

Sometimes when shootin’ long exposure I’ll case the joint first, returning later when the soccer van has gone home and I’ve got the place all to myself.  Hey – nothin’ against soccer vans It’s just better they’re not there when I’m workin’.

The same for most modern vehicles really – they just don’t build ’em like they use to. They don’t have the same character now-a-days, you know what I mean?

Sometimes I gotta come back a bunch a times ’til I got the place to myself.

OK, enough of the ‘Hartigan’ from ‘Sin City‘ impersonation… or Sam Spade… or whatever that was supposed to be. It was a fun bit. And by fun, I mean fun for me and, most likely, agonizingly painful for you. For that I apologize. A little about the gear I use, then on to some tips I’ve learned!

THE GEAR I USE

Nikon D700 – the full-frame D700 has superb low light performance and an arsenal of fast lenses available to it – so you would think this would be my camera of choice for night photography.   And in fact I have taken a fair-share of night photos with it.

However its size and weight can be cumbersome especially when shooting from the confined space of my vehicle (more on this later).  And the lack of articulating LCD, true live-view EVF, and focus peaking are sorely missed at night.

So more often than not, I find myself reaching for one of the smaller cameras.

Sony NEX – I find the NEX 5/6/7 (I’ve owned each) are great night cameras. While the APS-C sized senor doesn’t give you the same low-light performance as that of a full-frame camera, the current Sony sensors are pretty darn good for low light (especially when combined with current noise reduction software such as that found in Lightroom).

Add to that an articulating LCD, active EVF, and focus peaking… along with its small size and weight that makes it usable with a small GorillaPod, and you’ve got a great night camera IMHO.

The in-camera image composite modes (anti-motion blur, multi-frame noise reduction) are also useful in some situations and can be used to interesting effect.

Nikon1 V1 – even the V1, with it’s (relatively) tiny 1″ type sensor is another favourite of mine for night photography.  The significantly less dynamic range (compared to a full frame) often isn’t an issue as I find myself looking for interesting, high contrast lit scenes (and it’s that contrast, an oasis of light in a sea of darkness that’s frequently the story).

The noise from the V1 sensor has a very fine, film-like quality which actually enhances many of the images.

The default colours out of the Nikon provide one of the best renderings of night scenes I’ve seen and the lenses for the 1 system (particularly the 6.7-13mm)  are top-notch. Nikon’s VR, at least on the 1-series lenses, is simply amazing.

I, on the other hand, like my GorillaPods.  I have 3 that I use – the Original (which supports up to 325g), the SLR-Zoom (which holds up to 3kg) and the The Focus with Ballhead X (which supports up to 5kg).  I think the weight rating is under ‘ideal’ circumstances and so depending on what I’ve got the GorillaPod wrapped around and how the camera’s weight is distributed, I often get much less support than advertised.

GorillaPods work best for the type of shooting that I do.  Shooting from within a vehicle is a common technique in rain – but combine that with long exposure night photography and now you’re looking to stabilize your camera in the tight confines of the vehicle cabin.  That’s where a GorillaPod and a small, light body and lens can be a joy to work with.  I also like that I can easily attach the smaller GorillaPods to a belt or belt-loop when travelling on foot.

10 TIPS AND TRICKS FOR BEGINNERS

1. INVEST IN THE RIGHT GEAR

Traditionally the recommendation is a full frame camera with fast glass – but as noted above I think it’s more important to find what works for you, and your style of shooting.  A lens hood can be helpful in reducing the flare of stray night lights and a remote or cable release can be handy.  Bring a flashlight.

I always shoot RAW anyways but I find the latitude that RAW files give you in adjusting the colour balance and shadow detail particularly useful for night photography.  Please don’t post each and every photo with an all-orange-sodium-vapor-bulb-colour-cast (sorry, it’s a pet peeve of mine)

OK, it really depends on the scene, what you’re shooting, and your personal preference – but I tend to shoot a lot of wide night shots. 16mm-28mm is a commonly preferred field of view for me.  You’ll want shadow and black in your image to suggest depth, add mystery, and provide framing and draw the viewer’s attention to the subject. But be mindful that ‘dark matter’ in images is “heavy” – it can easily unbalance the composition. Too much black can drown your subject.

4. PUSH THE ISO BUT BE AWARE OF YOUR DoF

When shooting handheld I’ll typically push the ISO as high as I can – to what I feel is an ‘acceptable’ level based on the camera  (ISO 800. 1600 or even 3200) and then I’ll open-up the aperture as much as required in order to get the shot while maintaining a sufficient shutter speed to prevent motion blur.  This means however that you may often find yourself shooting at f1.8 or f1.4 so being aware of the narrow depth of field and choosing scenes that don’t require a lot of front-to-back sharpness is important.

5. KEEP THE ISO LOW, AND STOP DOWN

The opposite of the above.  When shooting long exposures on a tripod I keep the ISO as low as possible (100, 200 or 400) and stop-down to shoot in the len’s ‘sweet spot’ (best aperture range for sharpness and detail).  Or I’ll stop down even more (f12, f16) in order to create beautiful starbursts if it’s appropriate for the scene.

6. SEEK THE RAIN AND FOG

Rainy reflections and shrouding mists are elements that work beautifully at night!

Whether it’s a DSLR with lots of buttons and dials, or a menu-driven compact camera, you’ve really got to know your gear inside-out, like a Navy Seal who can assemble their weapon with their eyes closed.  You’ll be shooting in the dark and may need to make some basic adjustments quickly. Fiddling too long means the shot could be lost, and turning on a flashlight may draw un-wanted attention.  At the very least you’ll want to be able to quickly change your ISO, aperture and shutter speed. And most importantly you’ll need to know where ‘infinity’ is on your lens, and be able to focus to it easily

Last but not least, despite the many technical considerations when shooting at night, for me it’s all about the mood.  The feel of the night.  The emotion.  Sometimes it’s the solitude, a feeling of isolation, an introspective melancholy.  Other times it’s about the hustle-and-bustle of the night life.  The glare and the glitz.  The bright lights and the big city.  Whatever the case, that ‘vision’ should come first and foremost.  Never let ‘the technical’ take you out of the moment and away from that.  Follow your vision and you won’t go wrong!

1 TIP AND TRICK FOR ADVANCED PHOTOGRAPHERS

1. Be inspired.  Below are  a half dozen photographers whose night work inspires me: 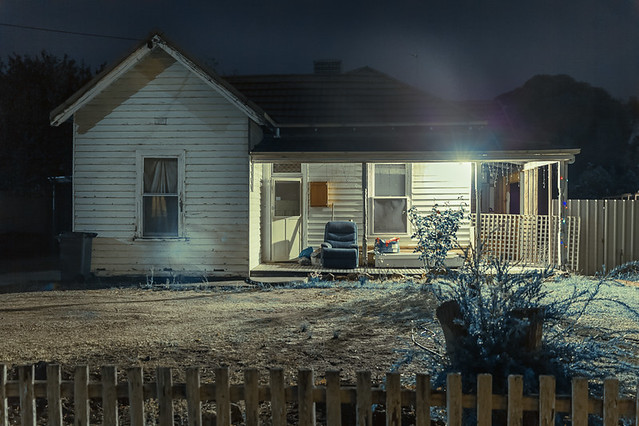 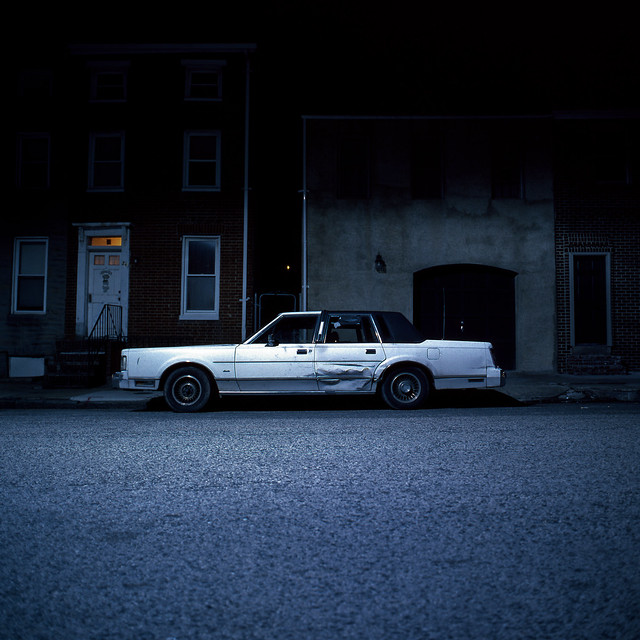 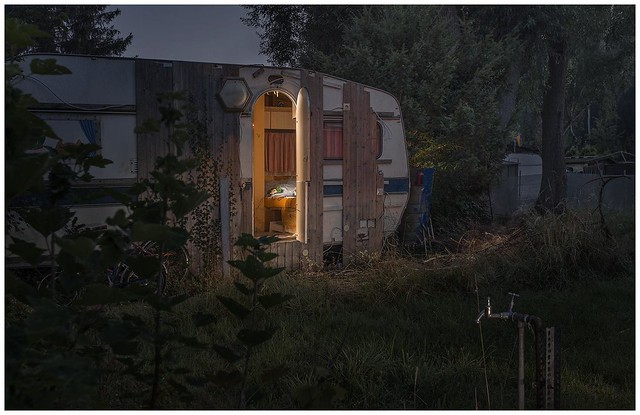